Education - A Gift for a Life time

The 92nd Scripps National Spelling Bee entered unchartered territory, as the grueling competition dragged on more than 3.5 hours from the scheduled 2 hours on ESPN, during prime time. When no child faltered in spelling from the 15th through 20th rounds, the officials ran out of challenging words and all eight contenders were declared co-champions. Out of the eight, five are from North South Foundation. 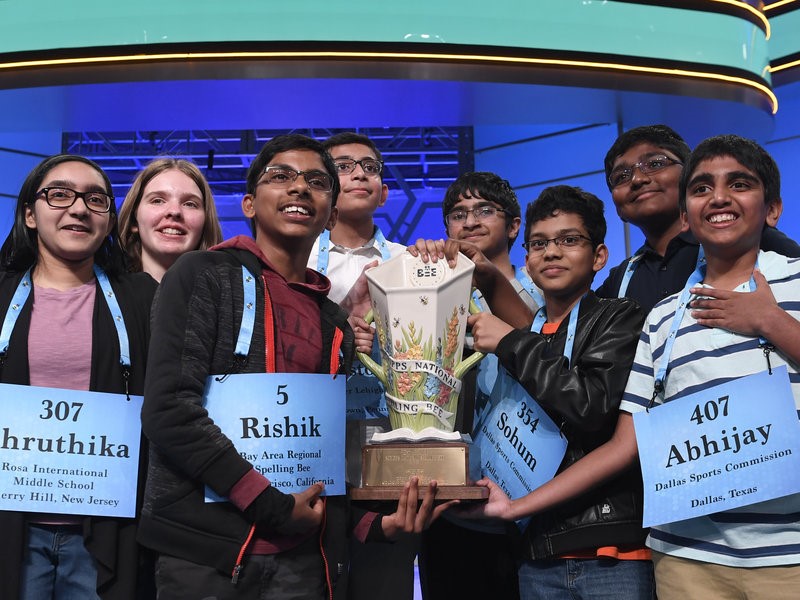 A short video clip on YouTube about the Octa-Champs: https://youtu.be/cb-C3wHWVuY

For 12 years in a row, starting with 2008, North South children have taken first place at the Scripps National Spelling Bee.

In addition to North South Foundation’s presence at the Scripps Bee, for 8 years in a row, starting with 2012, North South children have also placed first at the National Geographic Bee.

Nihar Janga set a record by winning the Scripps Bee in 2016 and the National Geographic Bee in 2019.

A short Video on YouTube about Nihar Janga: https://www.youtube.com/watch?v=_LAZ4OYMDjc

For 2 years in a row, North South children won as members of the championship teams at the International Math Olympiad.

North South Foundation, a non-profit organization founded 30 years ago, is completely run by volunteers. Through its 90 chapters across the nation, North South Foundation annually conducts regional competitions in spelling, vocabulary, math, science, geography, history, brain bee, essay writing and public speaking during the months of March and April. More than 15,000 contestants participate, spanning from kindergarteners to twelfth graders. North South Foundation chapters also conduct workshops, prep-clubs and mock bees. High scorers in the regional contests are invited for the National Finals, which are scheduled to take place this year at MIT from August 9-11, 2019. Nearly 2,000 contestants, along with their parents, are expected to compete in this major event.

Since the initial North South Foundation bees in 1993, more than 200,000 contestants have benefited from the academic resources and more than 3,000 have volunteered with NORTH SOUTH FOUNDATION.

Since 1989, North South Foundation has offered college scholarships to students in India who excel among the poorest of the poor and cannot afford to go to college. During the last 30 years, North South Foundation has been able to award more than 20,000 scholarships, through 25 chapters, across India. The scholarships are given to students in specialized courses including medicine, engineering, agricultural B.Sc. and 3-year diploma.

The funding for the scholarships comes from donations and surplus revenues from contests, workshops and coaching. This is a win-win scenario for parents and volunteers whereby helping a child excel in academics in the USA also helps a poor child attend college in India.

The North South Foundation awarded its inaugural Role Model Award, ‘Vishwa Jyothi’ to Rajiv Vinnakota in 2003, Nipun Mehta in 2004 and Nimesh Patel in 2014. This award showcases human values and academic excellence to the children of Indian American community.